To everyone out there, firstly, I want to wish the happiest of holidays, in whatever form you choose to celebrate. I truly hope these holidays are wonderful for each of you. It's a time to remember those that we love and the friendships we cherish. Hope the new year brings lots of great opportunities to each of you.

Last Sunday I performed my own arrangement of Oh, Come, All Ye Faithful for my local congregation. It turned out wonderfully and I certainly felt the spirit of Christmas as I sang it. My little brother, a very talented pianist, composer, arranger, improvisor, etc., accompanied me on the piano, though I wish we could have done it with the organ. If you're interested, here's the sheet music for your enjoyment. Feel free to download and use! 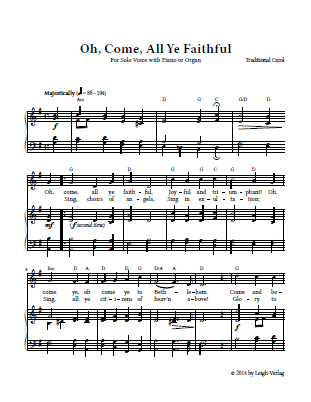 Posted by Leigh Verlag at 10:35 AM No comments:

Email ThisBlogThis!Share to TwitterShare to FacebookShare to Pinterest
Labels: holiday

So, I've actually had this done for a little while, but just hadn't released it yet. This new font is a OFL derivative of a (basically) non-public OFL-licensed font designed by engraver/composer Florian Kretlow (github source). It follows what I call the "inky" look, where internal corners (at least some of them) get "rounded" by what would have been caused by the capillary action of the liquid ink. Here's a sample (click to see a full-size PDF).

I think the font itself is quite nice. It has some inconsistencies that bother me a little, though. For example, the default flat symbol is thicker in the stem than inside the eyelet. The second f in the "sffz" ligature is different from the first. Having these inconsistencies doesn't make the font BAD, per se, just not to my taste.

Fortunately, in the source files, there were a bunch of other variants in his source files that were more to my liking. Here's the same score as above, but with my selected variants, as done in LilyPond.

The new font is available at fonts.openlilylib.org. Go get it! Here's a more extensive example: Grieg's Piano Concerto in A-minor, Second Movement.

My name is Abraham Lee. Leigh Verlag is my musical pen-name. I am an independent music engraver, editor, consultant, publisher, and music font designer, focusing and specializing in the use of LilyPond.

I hope that the content presented here is useful or at least interesting. Please feel free to leave a comment or if you'd like to communicate privately, please send an email to: